Fraternity of the Blessed Virgin Mary

And the Truth will make you free

The Fraternity of  the Blessed Virgin Mary was founded by Father Theodossios Sgourdelis (1909-1989). Born in Greece in a family of Orthodox religion, he lived for a long time in Paris where he held an intense activity in the field of culture and art before World War II. Later, when he entered the Catholic Church, he founded the Fraternity of the Blessed Virgin Mary in Athens and then in Rome. He was ordained a priest in Genoa by Cardinal Siri, who canonicamente erected the Fraternity as Pia Union in 1968; it was recognized by Cardinal Bagnasco, Archbishop of Genoa as a Diocesan Clerical Public Association in 2010 and launched the request to be recognized as a Society of Apostolic Life.

The Fraternity is a Family of fraternal, liturgical and apostolic life includes two main branches: the Priestly Community Jesus Sacerdos et Rex and the Community of Sisters Agnus Dei. A secular branch of lay Members Mater Ecclesiæ is attached to the community of the Brothers.

In the midst of an era of constant upheavals and adaptations, Fr. Theodossios felt the need for renewal, in the faithfulness to the great tradition of the Church. The purpose that he pointed to the Fraternity was spiritual renewal in doctrine, in the life of liturgy and devotion, in personal life, and in community.

The name itself of the Fraternity recalls the apostolic ideal of the primitive Church: common life must be based on the love of truth and brotherly charity: «No work for Christ can be effective, nor any apostolate can ever perforate the matt wall of History, unless we live the great bond of the Apostles of Christ, and this bond was an unimaginable charity among them because of the Master.»

Father Theodossios deeply perceived the mystery of the Immaculate Conception, Divine Maternity, and the ontological role of Mary in the economy of salvation, for this reason the Rosary occupies a privileged place in the common and private prayer, and the consecration to Blessed Virgin is the first step in the path of new life.

The Fraternity has received from its Founder a message of inner renewal in the conviction that «the only work that dominates and overcomes the story is spiritual combat, the liberation effort of every soul to unite to God and deeply know the Truth.» From this principle is born an apostolate that is intended to convey first and foremost a spiritual formation and ready to model according to necessity, always in harmony with the magisterium of the Holy Father and the requests of the Pastors of the Church. Every apostolate in the Fraternity is based essentially on fraternal life and liturgical life. 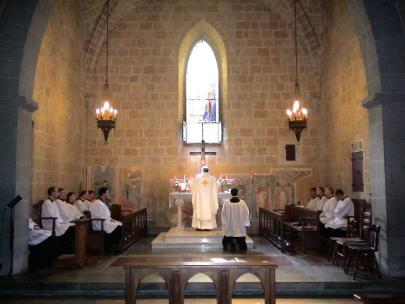 Particularly important for spiritual deepening has always been the study and teaching of music, especially sacred music for liturgical worship. In addition to Gregorian Chant and Sacred Music, the Fraternity also cultivates painting and iconography as a means of spiritual elevation for the glory of God and the good of souls.

Over the years, the concern to convey the sacred doctrine of the Church has taken on various forms: spiritual retreats, preaching, catechesis, apostolate, parish ministry, pastoral care at hospitals. From the very beginning, the unity of Christians in the one Church of Christ is one of the purposes of his prayer and apostolate. Although having its principal apostolate centers in Italy and France, the Fraternity maintains apostolic ties with the Scandinavian countries and the Orient, especially Greece.

In Genoa, the priestly community has been a parochial and university ministry since 1974 and is currently in charge of the Parish of  SS. Vittore and Carlo, S. Sisto di Prè and S. Giovanni di Prè in the Old Town, in addition to the assistance at the University Chapel in via Balbi.

In France the priests of the Fraternity serve in the Diocese of Sens-Auxerre, devoting themselves to a parish ministry covering a territory of 18 villages and spiritual care for families through reception and retirement days.

The Fraternity, whose headquarters are in Genoa, has its apostolic center in Bagnoregio, near Rome, with the houses of formation and retreats of the Priestly Community and of the Sisters of the Sisters. In this place, In this place, where Saint Bonaventure was born, the Founding Father concluded his life in the service of the Church.